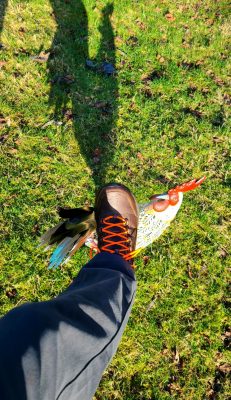 Just How Old Are Shoelaces? It’s a bit of a chicken and the egg question – which came first the shoe or the shoelace? It’s difficult to know for sure. However, accepting the fact, what our ancestors wore on their feet weren’t really shoes, and what they bound them with were laces. I’m gonna say laces… thoughts?

Walking around outside thousands of years ago, the elements were as harsh (if not more so) than they are now. People would wrap animal skins, wood and other materials around their feet. Obviously those protective layers wouldn’t stay in place without being attached in some way. Answering with sinew, vines and other strings, were wrapped around to keep things secure.

Lets travel back in time and see if we discover what was really happening. Discovering your time machine is not working is what I discovered. One thing is for sure, shoelaces are really old.

Imagine if they’d had Ironlaces to work with!

Eventually, better and better forms of foot protection evolved into what we know as the modern day shoe and with it, the modern lace. In many sources, Harvey Kennedy, is credited with the creation of the modern shoelace in 1790 in England.